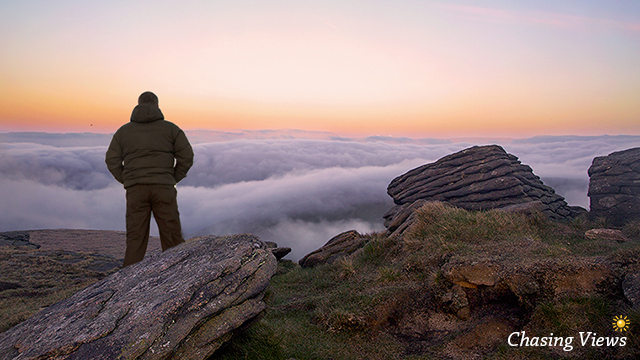 Well, my first impression of wild camping on Kinder Scout is WOW! What an excellent spot for a wild camp in the Peak District, the views were mesmerising. I had been looking forward to this mission for quite some time. It’s over 20 years ago since I last went trekking on Kinder Scout plateau. The day before my trek up Kinder, I couldn’t stop checking the weather, hoping it wasn’t going to spoil my plan. It was looking good, the weather forecast was ideal. Sunny with breaking cloud during the day, and a clear sky during the night. Awesome! I had purchased a new backpack (Hi Gear Long Haul Travel Pack 80+15L) especially for this mission as I had to carry camping equipment and food, as well as my usual camera equipment. 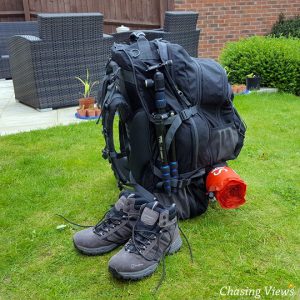 The backpack ended up weighing 19.5kg in total, not what I had anticipated!  I chose the backpack based on volume, rather than on cost or brand name. I must take my hat off to Hi Gear, the backpack served me very well.  Read my Hi Gear Long Haul Travel Pack 80+15L Review

So, the day for wild camping on Kinder Scout had arrived. I awoke to a beautiful morning in Nottingham, lovely blue sky with a warm feeling in the air. After grabbing myself a few cups of strong coffee, it was time to head off to Edale in the Peak District.

There are a number of routes from Nottingham to Edale, but as I live in South Nottinghamshire, I decided to head off along the A50, A515 through Ashbourne to Buxton, then onto the A6 through Dove Holes, and eventually turning onto the A623 to Sparrowpit. I decided to take this route so I could take in the views of Winnats Pass. A very tight road that is carved into some breath-taking scenery. As the weather was so good, I decided to drive through Winnats Pass and park at Speedwell Cavern to enjoy a nice hot drink and a sarnie (slang for sandwich).

After enjoying my coffee break and taking in the fantastic views of Winnats Pass, I jumped back in my car and headed towards Edale Train Station as it allowed overnight parking for £6, and it was an ideal location to start my walk up Kinder Scout. Grid ref: SK 08484 87560 After walking a short distance, I came across the much documented Old Nags Head pub. It would have been rude not to “nip in” for a swift pint of their best cider. Although it was the first time that I have stood at a bar with a 19.5kg backpack on my back, I found the pub to be nice and friendly, I got a warm welcome from the bar staff, and I thoroughly enjoyed my pint.

Now the light refreshments were out the way, it was time to start my trek up Kinder Scout. Although there are quite a few different routes up Kinder Scout, I had already opted to commence my walk from the official start of The Pennine Way which was literally a stones throw away from the pub I had just left.

As I headed onto the path opposite the Old Nags Head pub, I noticed a sign (small green sign on stone wall above) which notifies you that you are at the official start of The Pennine Way. As I made my way forward, I passed through the middle of some very well kept, picturesque stone outbuildings which looked good enough to be on a postcard. I eventually reached a gate which, after passing through it, gave me a great sense of space and some fantastic views. Although it was not very steep at this point, this was the start of the ascent. I knew it was going to get tougher the further I trekked, but the clean fresh air and openness took my mind off the hard work ahead. As I entered the field, I was greeted with a pathway of very sturdy thick stone, probably laid by The Peak District’s National Trust rangers (Autumn and winter are slab helicoptering season for the Peak District’s National Trust rangers)

After following the Pennine Way for a few miles, gradually working my way up to the final push, I was greated with one very steep climb which I knew would lead me onto Kinder Scout Plataeu. Although there were signs that others had taken this route, it didn’t come across to me as being a well trodden path, probably due to how steep it was. I knew it wasn’t going to be an easy route, especially with 19.5kg on my back. I decided to take a 10 minute rest, rehydrate myself, and take in the fantastic views of Edale. After enjoying a short rest, I was in the right frame of mind to take on this route!

As you can see from the image, it’s not what I’d call a leisurely stroll. I was barely a quarter of the way up before I really started to notice the full weight of my backpack. As I climbed up the steep mound, walking parallel to the dilapidated stone wall, it was becoming a real slog. The excitement of wild camping on Kinder Scout, and the thought of capturing some fantastic photographs, kept me going.

As I soldiered on, I eventually reached a point where I could see in the distance, a pile of huge rocks surrounded by mist. To the right of me was a dark green peak, standing proud with a backdrop of bright blue sky filled with fluffy clouds. As I continued my approach towards the huge rocks, I met a young couple who had already enjoyed their time on Kinder Scout plateau. After a brief conversation, it was clear that they had enjoyed it just as much as I was looking forward to it. After another half a mile or so, I finally reached the spot where I planned on setting up camp.

Wow….. what a buzz and mixture of emotions. Relief after finally removing my back pack, but most of all, the mesmerising views which surrounded me. 360 degrees of fantastic scenery. I must have been standing there for 30 minutes or more just taking in the views.  After having a good look around, it was time to get things sorted. I needed to find a suitable spot to pitch my tent, taking into account that the weather can change within minutes. I’ve spoken to a few people that have been wild camping on Kinder Scout who underestimated the changeable weather patterns.

Time to pitch the tent! If you look at the following photo, this gives you an idea about how quick the weather pattern can change in the high parts of The Peak District. It was taken only 20 to 30 minutes after the image above. Tent is pitched!

So the hard work is now done. My tent is pitched, kitted out, utensils at the ready. Time now for a nice fresh brew, something to eat and start enjoying my wild camping on Kinder Scout. Gas stove at the ready!

After enjoying some nice food and a brew or two, it was time to zip up the tent and have a scout around the immediate area looking for good photography locations. One of the main reasons why I decided to go wild camping on Kinder Scout was to hopefully wake up above the clouds and experience it with my own eyes. If I was lucky enough to capture a good shot of myself standing above the clouds, that alone would make this wild camp well worth while!   After scouting around for a while, I did notice that the day was slowly drawing in. To my amazement, some cloud had just broken up, giving me a welcome glimpse of the sunset. Not something I expected after the earlier change in the weather.  My mind was now set on trying to capture a shot of the sunset over Kinder Scout.

Unfortunately, the cloud soon covered the sunset and reduced my view to a dark sky with very little worth capturing. Gutted! The main reason for wild camping on Kinder Scout was to capture what I could, in the best possible way. After pondering for a few minutes,  I decided to boil up for another brew, then hit the sack ready for an early start at sunrise. Good Night!

The next morning, I unzipped my tent, peeked out to see what welcomed me. I couldn’t see a thing, not even the stone I had used to balance my stove on, which was barely 10 feet away. It wasn’t looking good, but I got all my camera gear set up just in case.  In the meantime I enjoyed a nice hot morning brew to warm the cockles. After about 20 minutes, things started to change. The cloud was thinning out and the sun started to peep through. I was so happy the weather had suddenly changed for the better. Although there was still mist lingering in the air, it turned out that the weather was on my side, giving me the chance to capture the following photographs from Kinder Scout.

The last photograph in this sequence was the money shot for me. It’s hard to describe the feeling I got while standing there literally above the clouds. The sense of space and freedom, mixed in with a feeling of accomplishment. Absolutely awesome!!  Will I be doing it again? Most certainly!

It’s been a great pleasure documenting my walk in The Peak District, and sharing the photographs taken on my wild camping on Kinder Scout. I hope you enjoyed reading it as much as I’ve enjoyed sharing it. If you have any questions that need answering, or wish to post a comment. Please do so in the comments box provided.

I’m going to leave you with a final image that sums up the whole experience!